The world has started one of it’s major historical cycles yet to confront, which in history is about to change the whole spectrum of life on earth. On it’s path, this is changing and about to change the behavior of developments in civilizations at the terms of rotational movements (non-linear progress). These new measures and adjustments on the world order are necessary and crucial for the carriers and perpetrators of these planifications set on the world’s field of time. This was planed and is being carried not to conclude with an endgame or with any final operation but, to implement a “Great Tectonic Transformation” not only in the region but, to the entire world.

In 1993, American political analyst Samuel P. Huntington, predicted in his book Clash of Civilizations, that the conflict between the Western World and the Islamic World in the near future, would resemble the Soviet-American confrontation during the Cold War (1946-1989).  Just as Huntington stated in the past “future wars would be fought not between countries, but between cultures”.

World World III started in 2013 in a new hybrid way war, after the end of the long Mayan Galactic Cycle of  5,125 years in 12/21/12 and in the year when the Federal Reserve (FED) went bankrupt. In that same year 2013, the Islamic State of Iraq and the Levant (ISIL or ISIS) captured the city of Raqqa in Syria. 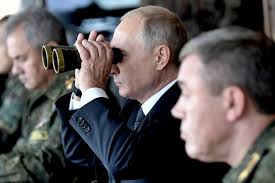 On June 29, 2014, ISIL proclaimed the World Caliphate ( Sunni Black Caliphate), that year was when WWIII was declared to the world.

On September 13, 2014, Pope Francis announced that ” the Third World War has already begun”, it was obvious that he knew perfectly what he was talking about.

On September 30, 2015, Russia responded with it’s first airstrikes in Syria against ISIL, with the Green Light of Syrian President Bashar al Assad, leader of the Shiites sect of Alawites.

This action that Russia did back then, represented a symbol of Peace, for political analysts, journalists, activists, peacemakers and heads of state, mostly in some parts of the world, like Latin America. Those who saw this, from that perspective can consider themselves victims of the left-liberal communism (Trotskyism). Russia entered Syria, not as a truly seeker of peace or justice, but as representative of the Western World, not Soviet, nor as part of the Eurasian civilization. Russia considered her self part of the Western World, representing the slogan of ”Moscow – Third Rome”, this thanks to the homeland traitors that are in Putin’s cabinet, for example Dmitry Medvedev, loyal to those who put him in power, Yeltsin and Clinton or Sergey Shoigu loyal to the Knights of Malta, not Russia. 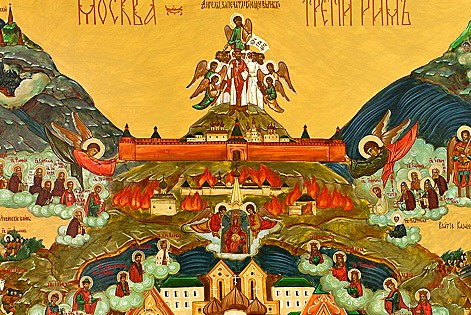 The concept of ”Moscow- Third Rome”, arrive to Russia from Rome at the end of the XV century with the Sophia Palaeologus niece of Constantine XI, the last Byzantine Emperor, and second wife of Ivan III Grand Duke of Moscow and All Russia. The coat of arms of the Palaeologus Dynasty, double-headed eagle, came along with her, representing the banner of “Moscow- Third Rome”. In 1991, this concept was activated.

World War III, conceptually is the predicted biblical “Battle of End”, this biblical prophecy predicted long ago by Kabbalah priests (Old Believers). According to the prophecy the ”Battle of End” will be fought between the ”King of the North” (Heirs of Rome) and the ”The King of the South” (Heirs of Caliphate). Russia (Moscow- Third Rome) since 2014 started as “King of the North” (West) confronting the Radical Sunni Islamic State of Iraq and the Levant as the “King of the South” and as the prophets stated “The King of North will be the first to attack”, which basically happen in September 30, 2015 (Russia attacking ISIL). In 2017, The Jewish Global Project (B’nai B’rith and London)  stop playing in team with Radical Sunni Islamic State of Iraq and the Levant (Black Caliphate in Damascus) , which was eliminated by Russia (Moscow-Third Rome). This switch of alliances of The Jewish Global Project it was done as a requirement for the decision of Britain to leave from the EU (Brexit), due that is necessary for Britain the liquidation of the State of Israel, so in order that action can take place they need common perspective in the region and common interest as well. And what are those common perspectives and interests that Britain is looking for?

1.Partners in the region that are willing to liquidate Zionist Israel, like the Turkish Sufi Red Caliphate with it’s capital in Istanbul, which proclaim the need for the wipe out of the State of Israel from the political map of the world and from the British standpoint of view it works as an effective and strong partner for terrorism profits (as market of Britain), effective weapon for the decentralization of the EU, and as an effective weapon of hybrid front warfare against liberal democracies at global scale. The problem with the new Caliphate is that it needs economical resources in order to achieve such power. So Britain has to play with Moscow(New Horde project, not Moscow Third Rome, but heir of the Red Project- Stalin) to build new Caliphate at the expense of the New Horde, and in order to give power to the New Horde they need to destroy the liberal gang (Moscow-Third Rome) with the new hybrid war against liberalism, behind these operations are the Jewish Global Project agents, the Rothschilds.

2. And finally the indirect instrument like Shiite Islamic Republic of Iran to clash with Israel possibly in nuclear aspect, this will develop the final phase of the “Battle of End” (WWIII)

About the New Caliphate(Turkish Sufi Red Caliphate), which replaced the Black Caliphate, it is possible that part of it’s geographical position, represents the “King of North” along with the Islamic Republic of Iran, but internationally it would represent and be the future face of the World of Islam, which means that it would will defeat the Western Civilization countries. Have in mind that in this game the “card of Faith” always beats the “the card of rationalism”, it is ineffective to kill bug with a missile, and even more ineffective, when those bugs already invaded your homeland.

The “Battle of End”, is being carried by the Jewish Global Project (carriers of the 3,000 year old Plan of Solomon), and according to this plan, the “Battle of End” will begin 30 years before the “Anthropological Turn” or what Western scientists called the ”The End of the World” since the days of Issac Newton, this was going to happen in 2040 according to the biblical prophets, but according specific calculations is 3 years after 2040, which is 2044, just as the Chinese Taoists have it in mind.  So when we rest, minus 30 years to 2044, we get 2014! Coincidence? Don’t think so, if you pay attention this it’s being implemented at highest levels of conceptual thought, hidden to European education. Now this doesn’t mean that the world is going to end in total chaos and destruction no!. What’s going to end is the whole concept of the world as we know it, on this year the history of the world’s civilization will end, with the beginning of the “Anti-Christ Kingdom” of  Transhumanism plan (NBIC).

The purpose for a World War, from the standpoint of view of the Jewish Global Project is to accelerate the destruction of Bretton Woods System created in 1944, and gain new profits and assets from the war to invested in a New Monetary System, replacing the previous one, with the two world contour economical alternative program presented in 2008, where one will be the United States with the digital currency of the dollar or cryptocurrencies (fuel by the Transhumanism plan-NBIC ), the other will be People’s Republic of China, with the Gold-Yuan pattern, thanks to it’s vast vaults of Gold. This was deeply develop by the historic visit of Xi Jinping in 2015 to Great Britain, which mark the beginning of the “Golden Era” between GB and China in diplomatic relationship, which will last 10 years 2015-2025. This, from a conceptual basis means an alliance between the Jewish Global Project(Kabbalists) and Datong Global Project(Taoists). Let’s have in mind that the Rothschilds have been very active in the chinese economy.

From a non-geopolitical perspective, the history of world wars are view in this format:

WWII (1939-1989, because final battle was known as “Cold War”) —- War on Ideologies. Winners are Anglo Saxon Liberalism and Soviet communism. Loser is Fascism in Germany, Italy, Spain, Portugal, Romania, Hungary and Japan( also the Vatican). In the final battle(Cold War) the Soviet Communism was defeated by the Anlgo-Saxons, this was the Triumph of Liberalism.

WWIII (2013/14—2020/21) —-Is a War of Civilizations. Future Winner is Islamic World with it’s front leader in Turkey( now Sufism, not Shittes, nor Sunni). Losers is Western Liberalism. Biggest Beneficiaries are the Jewish Global Project (kabbalists in London, leading the 3,000 year old Plan of Solomon), Datong Global Project (Taoists, leading 3,000 year old plan of Datong Unity), Black International Global Project ( Teutons and Vatican’s secret knowledge) and possibly the New Horde in Eurasia( peoples non-biblical  civilization of the single state of Genghis Khan, from the heartland of Russia, leading land globalization and spirit globalization with the five above principles along with the 64 yasi points.

Now the question is, how will these world projects affect mankind’s history and most importantly, are we prepared for what’s coming?

The Future will sooner or later tell us.